Talking to the Team – U18 Kelly Grant

Posted at 10:20h in Uncategorized by Sarah 0 Comments
0 Likes
Share

Ahead of the Frickley under 18 championships next week, we caught up with a few members of the FOMO sponsored squad to learn a bit more about the partnerships that make up the team and how their preparations are going.

First up is Kelly…

Horses name/age/height: My horse is called Heaven Eyes (her stable name is Heaven) she is 22 years old and 14.3hh

How long have you been eventing and what level do you compete at? I have been eventing for three seasons now, however, my first year saw of me fall off at water which cut our season short. The past two seasons we have been competing at BE90 and this season moved up to BE100 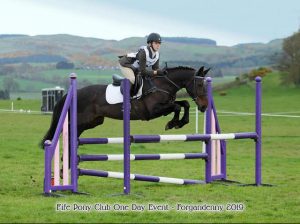 Tell us a bit about your achievements/results this year: This year we have competed in multiple events such including Forgandenny u18’s where we were. We were tenth at Floors u18’s and fifth at Scotsburn u18’s which was fantastic preparation for team selection. Last weekend we went to Forgandenny 2 where heaven was ace to come sixth. What I am most pleased about is that over half the events I have done this year were completed double clear inside the time.

What are you looking forward to most about heading to the championships? I am so excited to go down to the championships at Frickley especially for the experience of being a part of a team and having all the support and equally supporting my other teammates.