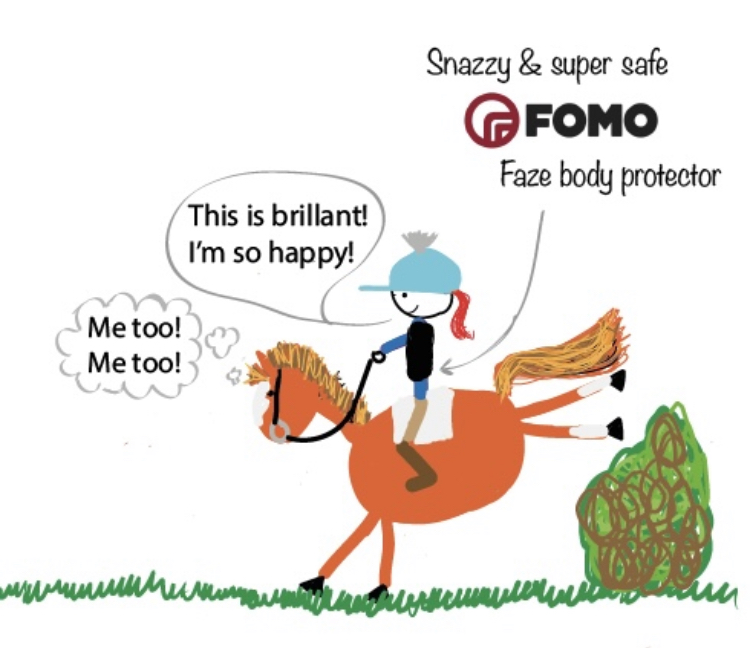 Hi, my name is Karla & you might know me as the blogger Muddy Mayhem. I’ve been involved in eventing my horse Vince (known as Miiiiiince on the blog) at BE Novice level with the ultimate aim being our first 2* international. I share my ups, downs & try to keep a grip of my, quite frankly, chaotic life.

I’m so excited to be working with FOMO as an ambassador. The company had impressed me with their design & dedication to creating the ultimate body protector. As soon as I put my FOMO FAZE on I knew that I’d found the perfect body protector, it’s amazingly comfortable…which I tried to demonstrate by doing a ‘bridge’ with my body (a totally bizarre thing to do as I’ve never been able to do one of those even when I’m not wearing a body protector!).
For those of you that don’t know what team chasing is, it is the most brilliant sport ever invented. I honestly believe it was created by a bunch of people who were drunk, in a pub.
It involves a team of 4 horses & riders, galloping around a course of, mostly, massive hedges.
The rules are :
1st 3 horses/riders home times count
Jump all the fences
Don’t fall off more than 3 times a round.
And….well that’s about it really.
It’s crazy,  it’s bonkers & it really is the most fun you can have on a horse.

If you’d asked me how I was a few months ago how I was I would’ve replied ‘fine’. However I was lying, I would have had a face like a slapped arse and I wouldn’t have meant it. Not at all.

My eventing, the very thing that I felt defined me, which previously had been mediocre at best, was…well it was going utterly to shit. I was dispirited and low wondering what had happened to my brilliant Miiiiiince. I was not in a good place.

‘Go Team chasing!’ people shouted at me from the comments of my mopey, miserable posts ‘You will love it! It will cheer up Miiiiiince’ I was assured.

Now all of you who suggested it, Do you have an ‘I was right’ dance prepared? Because you were right. I joined a fab team who looked after me and we had the most amazing time at the Warwickshire, I hope you all enjoyed the videos (can I take a moment to assure you all now that the creaking you heard wasn’t me farting in fear but how I’d attached the headcam)

However, the intention was always to get Miiiiiince back onside and then return to eventing for the remainder of the season. I got plans after all. I got aims I’ve got to achieve, right?

I headed over to the Sweary Kiwi for a lesson and to decide what BE events to enter. This all changed though as Miiiiince absolutely flew through a decent exercise of corners on a curving line with me bellowing how awesome he felt.

‘Whatever you guys are doing at the moment she said ‘keep doing it, because it’s working for you both’

And that’s how I found myself heading to Belvoir for our second team chase run.

The first thing to note here is that the English language is fucking weird. I was happily pronouncing it ‘Bell-vwah’ with the flourish I felt that it deserved until I found out it’s actually pronounced ‘Beaver’. Beaver? Fuck. Off. Why? How? What? It doesn’t look anything like Beaver.

Secondly, it was a fantastic course, proper big and bold. It made the Warwickshire look tiny. We walked the course with me getting paler and paler and, mainlining gin in a tin as I was, quite frankly, shitting myself, but Miiiiiiince knew what the deal was this time and where he had started a little unsure and backward at Warwickshire. Well, there was none of that. Ears pricked so tightly they were almost touching he gave me the most blinding of rides just bursting in confidence the whole way around. We had one hairy moment as a team where, at the 3rd, our lead rider went left, his horse went right and his testicles got smacked somewhere in the middle as he pulled out the save of the century to stay on. 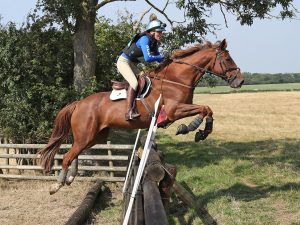 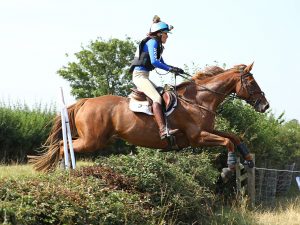 Our most recent and 3rd run was the Intermediate at the Grafton. The first half of the course was pretty much ‘trip hazard’ with small timbers until about halfway around where it chucked some decent hedges and drops in. When I say ‘decent’ hedge I thought it would be funny to take a picture of one of my teammates stood beside it. Turns out it wasn’t funny in the slightest, because it towered over her and I had to swallow down a little fear sick. It definitely caused enough trouble. At one point instead of the 2 teams of 4 that should’ve been on the course, there were 6 randoms just galloping together laughing,  the commentator tried his very best to work out what the very fuck was going on, but then just gave up and joined in with them laughing.

It was then I realised that right now, this very moment, right in the middle of this glorious chaos was JUST where I needed to be. I was so happy.

Instead of spending the run-up anxious and nervous, stressing I hadn’t done enough prep, I wasn’t ready and I was going to make an utter twat of myself (I really don’t know why I worry so much about that, it’s pretty much a given, right?) I had spent the run-up excited and looking forward to going. I was no longer going through the motions of what I thought everyone expected me to do and instead I was having the most glorious, brilliant, fucking fabulous fun with my amazing horse. My Miiiiince.

We had another superb run. Miiiiince pulling my arms out as he wanted to take on the course, I was literally whooping with the pure joy of it all – and no, I’m not in the slightest bit embarrassed by it. Why should I be? After what feels like months of crying in lorry carparks because I hadn’t had ‘the best day on paper’, of feeling inadequate and like a failure. I’m having the best time and boy, I’m gonna let the world know. Hear me roar bitches, hear me roar (no seriously, you will hear me roar, its that no ‘indoor voice’ thing of mine again, I reckon they could hear me back in Suffolk and I was nearly 3 hours away)

I see it all so clearly now. The standards that I was comparing myself to were irrelevant.

The things I had convinced myself were important really weren’t.

I’d pitched myself and Miiiince into some ridiculous self-created struggle that really wasn’t worth it.

What I’d convinced myself was my dream had just turned into a heavy millstone around my neck, dragging every last inch of enjoyment from my riding.

Eventing had made me doubt my worth, I thought I was not enough.

But I am enough. I know I am because I realised it stood in that glorious chaos of the Grafton team chase. Will I return to eventing? Absolutely, I will at some point. But this time it will be on my terms, genuinely not giving a shit what is ‘expected’ from me or what the results say.

I heard something recently that really resonated with me.

‘Life is short, it thunders by if you like the music you just got to get up and dance’

Miiiince and I are dancing to the music of team chasing and it is EPIC.